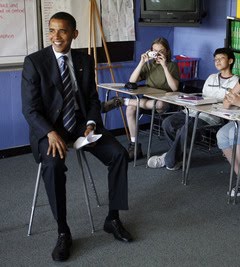 There has been some controversy, exaggerated in my opinion, over President Obama’s speech to America’s School children. Some conservatives went straight off the deep end with their everything liberals do is a conspiracy to warp America. I always cringe when this happens, and it seems to happen too often. I cringe because I think it hurts the cause of conservative/libertarian values. I have no problem with the health care debate – that is a huge, and legitimate issue to disagree on. The President addressing and challenging our children to pursue excellence in the classroom – not a big deal.

Of course many liberals do the same thing. They attempt to make meaningful arguments as to why Sarah Palin is the American version of Iran’s Mahmoud Ahmadi Nejad. When they do so, it totally hijacks their sanity and ideas. I can’t take anything they say seriously when I read such idiocy – and the their side won’t take what conservatives say seriously when we go conspiracy theory at every Obama move.
That being said, I read two fantastic articles on the President’s speech and thought I would pass them along to you.
You can read Dr. John Piper’s take HERE.
You can read Dr. Al Mohler’s take HERE.
– Brad