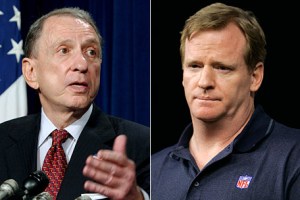 This week the NFL and Spygate were supposed to come to a conclusion. Matt Walsh was to speak with the Commissioner to clarify what his videoing assignments were when he worked for the video department of the New England Patriots. Walsh confirmed the speculation that there was NO video of the St. Louis Rams 2002 pregame walk through. Case closed, right? Wrong.

Rep. Senator Arlen Spector, long known for his meddling, as decided unilaterally that there needs to an independent investigation – that the NFL had not done enough to squeeze out more dirt on the Patriots.

With gas prices approaching $4 a gallon, the economy suffering, foreclosures up 65% this month, the Presidential primaries, a war in Iraq, National disasters in Myanmar and China – one might think that there was enough going on in the life of a congressmen to keep him busy, but I guess Arlen is one heck’ufa multi-tasker.

The NFL, and the rule violations of it’s teams just shouldn’t be on the agenda of our Senators. It is an unnecessary distraction.

This circus does remind me of the average American church though. We are so often preoccupied with so many ‘distractions’ that our real mission – the preaching of the Gospel and Disciple making – suffers.

Ironically, it is usually the good things that distract us so much. Churches get caught up in providing so many ministries and programs that they dilute their ability to be effective and powerful. We get distracted by ‘stuff’ that isn’t supporting the real mission.

So, Arlen and the church could use a lesson in what it means to be focused.