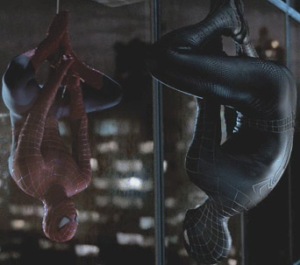 Spiderman 3 brought in the money, big time. I was one of those nuts who had to see it on opening night. I was pleased for the most part, although there was plenty of rumblings from the comic book enthusiasts – sorry guys.

Superman Returns and Spiderman 3 have taken visual effects to an all new level in the last year. 500 million bucks worth of dazzling imagery to be exact.

So Why “Spiritual Spiderman?” Because Spiderman 3 brought the message of Good vs Evil to the forefront once again in a creative and intriguing way. Here’s just a few observations:

There are plenty others…what did you see???