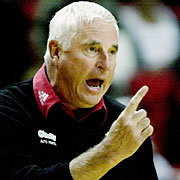 If you’ve watched ESPN in the last 24 hours you’ve heard that ‘The General’ Robert Montgomery Knight has resigned/retires as the Basketball coach of Texas Tech. The sports radio and TV shows have been abuzz with various views and commentaries on Bobby Knight’s career. What fascinates me, and has always frustrated my about Coach Knight, is his split persona – The Paradox of Bobby Knight:

He is the chief disciplinarian in the coaching ranks, yet demonstrates very little self control.

He demands that his players show him the ultimate respect, yet is infamous for his disrespect of authority.

He demands the absolute attention of his teams, but pays no attention to anyone.

He hates the media, yet it was his team in the reality show ‘Knight School’ for ESPN.

He is famous for doing things HIS WAY, but doesn’t always allow for other people to do things THEIR WAY

He holds the virtue of Loyalty at the top, and this week leaves his seniors with just 10 games to go.

Those close to Bobby praise him because they know him – the Knight we do not, and I appreciate that. However, it is simply too ironic that the man who wants his teams to be consistent, the so severely inconsistent.